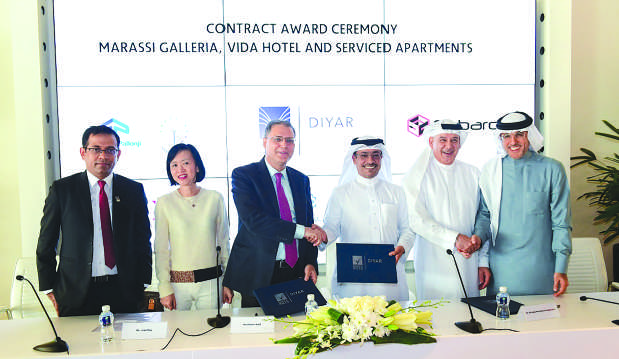 A contract worth more than $300 million has been awarded by Eagle Hills Diyar, the developer of Marassi Al Bahrain, to the joint venture contractor Cebarco Bahrain - Shapoorji Pallonji Mideast for the construction of Marassi Galleria Mall and Vida Hotel and Serviced Apartments. Dr Maher Al Shaer, managing director of Eagle Hills Diyar, told the GDN on the sidelines of the signing of the contract at the Marassi Al Bahrain Sales Centre that construction works are expected to be completed within 26 months from now. Marassi Al Bahrain is a joint venture between UAE-based private real estate investment and development company, Eagle Hills, and Bahraini developer Diyar Al Muharraq. Marassi Galleria will be a 230,000sqm shopping and entertainment centre with 116,000sqm of leasable area. It will host five interconnected lifestyle urban districts, each with a theme tailored to a specific customer taste: the high-street, the family plaza, a waterfront dining promenade, an animated rooftop and the luxury courtyard. The mall will also be linked to two luxury hotels and serviced residences projects operated by The Address Hotels + Resorts and Vida Hotels and Resorts, both of which are UAE-based. Key tenants have already signed leases at Marassi Galleria and by the end of 2019, more than 70 per cent of the mall would be leased out, said Dr Al Shaer. “Marassi Galleria will house some of the world’s top retailers. It is envisioned as a premier lifestyle shopping centre with retail areas extending to the beach, while merging with the leisure and recreational facilities located on the beachfront,” he added. Also present at the signing ceremony were Eagle Hills chief executive Low Ping, Cebarco Bahrain Chairman and KAR Group CEO Dr Khaled Mohamed Abdulrahim and Shapoorji Pallonji Mideast vice-president Rajeev Kaul. Ms Ping said the contract award was the culmination of a meticulous selection process. “We are confident that the project will be delivered on schedule and to the highest of standards. Representing a key anchor within the development, Marassi Galleria is anticipated to be the centrepiece that will define Marassi Al Bahrain.”